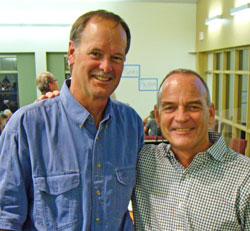 This nucleus group called the Rev. Dan Johnson and his wife, Sue, from Pittsburgh, PA. Dan led the first church service on Easter Sunday, March 23, 1985 (watch highlights from that launch). Under Dan's leadership, the church began meeting in the library of Orange Grove Middle School.

The new church focused its outreach in the Catalina Foothills community. Attendance grew to an average of 120 a Sunday by June 1992, when Dan Johnson followed the Lord's calling to pastor a Covenant church in Indianapolis, IN, and later another Covenant church in east Tucson.

Rev. Scot Gillan assumed pastoral duties on December 20, 1992. Under Scot's leadership, the church bought land and built its first building at 9755 N La Cholla Blvd, changing its ministry focus to the northwest side of Tucson and Oro Valley. The church grew steadily and made the decision in 1998 to call Jed Hollenbach as full time youth pastor. Jed was later ordained and became an Associate Pastor at Grace, later becoming the lead pastor of Harvest Ridge Covenant Church in Lenexa, KS.

In September, 2009, Scot Gillan announced that he had accepted a new call to Naperville Covenant Church in Naperville, IL. 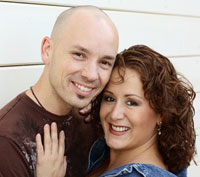 On June 20, 2011, the Rev. David Hillis began full-time ministry as Grace's lead pastor. David came to Grace from Hope Covenant Church in Chandler, AZ, where he helped develop programs in adult Christian discipleship and outreach. While at Grace, David constantly encouraged us to look for ways to take one step closer to Jesus in our lives and hearts. He led us to serve our community through a variety of outreach efforts, and led us in a successful expansion program to provide better facilities to serve children and families.

On January 12, 2020, David stepped down from pastoral leadership to pursue other ministry opportunities.

As we begin our search for a new pastor, Grace will be led by Pastor Duane Cross, an experienced Evangelical Covenant pastor who was formerly lead pastor at Hope Covenant Church in Chandler.